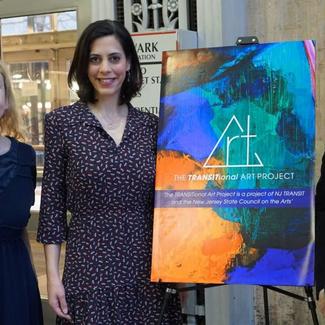 Yasmine Beverly Rana’s recent work includes Zoom readings of Paradise and The Fallen with the Jerusalem English Theater and Theater in the Rough, the 2019 International Human Rights Arts Festival at the Wild Project (Leena and Rose at the Barre), Mile Square Theatre and Writer’s Theatre of New Jersey (After Rome) Luna Stage (At the Barre), and Tara Arts of London (Amanda).  India’s National School of Drama in New Delhi produced three plays from Yasmine’s The War Zone is My Bed and Other Plays. The War Zone is My Bed was a Francesca Primus Prize finalist. Plays have been developed at theaters including The Looking Glass Theatre, Nora’s Playhouse (founding member), Los Angeles’ The Jewel Box Theater, La MaMa Experimental Theatre and Playwrights Theatre of New Jersey.  Fellowships and grants include NJ Transit and NJ State Council on the Arts TRANSITional Art Project (2019), New Jersey State Council on the Arts Award in Playwriting (2015), and a Walter E. Dakin Fellowship in Playwriting.  Publications include The Alabama Literary Review, Blackbird, The Contemporary European Idea, The Kenyon Review, Lilith, TDR: The Drama Review, and anthologies including The Best Contemporary Monologues, The Best Stage Scenes, and The Best Men’s and Women’s Monologues (Smith and Kraus and Applause Books). The University of Chicago Press and Seagull Books “In Performance Series” published The War Zone is My Bed and Other Plays, an anthology of four of Yasmine’s plays. In addition to being a playwright, Yasmine is an educator mentor to new playwrights (Northeastern University, Chicago) and drama therapist (Registered Drama Therapist and New York State Licensed Creative Arts Therapist).  She has worked in Bosnia, The Republic of Georgia, and Switzerland. Yasmine received her BFA and MFA in Dramatic Writing from New York University’s Tisch School of the Arts.

Conversations with Ken and Yasmine is a new program uniting two best friends on two coasts as they discuss race, politics, equality, social justice, education, and the state of the arts in today's landscape. Director and screenwriter, Ken Cosby and playwright and arts therapist, Yasmine Beverly Rana met twenty-eight years ago at a reception for incoming graduate students. Throughout the years, Ken and Yasmine have creatively collaborated on several projects with Ken directing the West Coast premieres of Yasmine's plays. In addition to being artists, Ken and Yasmine are both educators. In response to the current pandemic and political movements, Ken and Yasmine will bring diverse perspectives through their conversations and interviews.