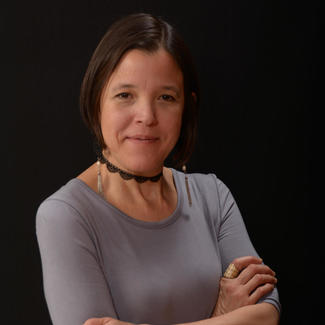 Tere Martínez is a Puerto Rican playwright and educator who lives in New York City. For the past twenty years, Tere has been an adjunct professor at Hostos Community College (CUNY) in the South Bronx. Her experience teaching a variety of writing and remedial courses led her to develop innovative drama-in-education techniques. She has expanded these techniques into skill-oriented workshops that she conducts in classrooms around New York City.

Tere’s teaching experience has had a profound impact on her playwriting. Her commitment to education has inspired her to write about a wide variety of socially relevant topics, including community organizing, HIV awareness and mental disorders. Her educational plays, Chain Reaction, Nihonjin Face, I Want You By My Side and ...and there’s always the stars..., were each commissioned by theaters or schools. Her print piece, Se valiente...son tus senos, about the importance of breast-cancer detection, was distributed nationwide.

Tere’s plays have been produced both in the United States and Puerto Rico by the Puerto Rican Travelling Theater, TeatroStageFest, Broadway Center for the Performing Arts, Hostos Repertory Company, IATI Theater and Pregones, among others. Her theatrical adaptation of When I Was Puerto Rican, and her original plays, Borinquen vive en El Barrio, Mi última noche con Rubén Blades and For Mi Chichí, have toured the United States and Puerto Rico, appearing at the Oregon Shakespeare Festival, CityParks Theater in New York City, and other locales.

Tere’s plays have been studied in Latino studies and literature programs at several universities. Her work has been featured in books and publications about Latino theater in the United States. Tere’s awards include Outstanding Achievement in Playwriting (HOLA) 2008, Distinguished Educator of the Year (Hostos Community College) 2010 and a 2011 NYSCA Playwriting Grant.

Tere received her M.A. in Educational Theater from New York University, and is a member of The Dramatists Guild of America.