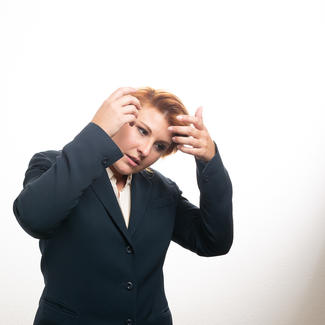 Stephanie Grilo is native to the southwest. She grew up in the red dirt of Oklahoma, the wheat fields of Texas and now lives in the desert skies of New Mexico.

Stephanie is a MFA Graduate from the University of New Mexico's Dramatic Writing Program under the tutelage of Gregory S. Moss.

Her MFA Dissertation play, Red Dirt, received a two weekend sold-out run at UNM's Theatre X. In 2017 her play, Nassau County had a staged reading through Chicago's Coffee and Whiskey Productions. And in 2020 her play, Daughter, went through development with a final filmed staged reading with Blackout Theatre Company in Albuquerque, NM.

She has been involved in several Indie Film Projects in Albuquerque throughout the past decade as well as a participant in the National 48 Hour Film Project.

She has performed throughout Albuquerque, New York and Internationally at the Beijing School of Drama. She is a proud member of the NM Shakespeare Festival, an Orchard Project Core Company Alumni, Blackout Theatre Company Alumni, and a member of the Chicago chapter of Naked Angels theatre company where several of works have been read.