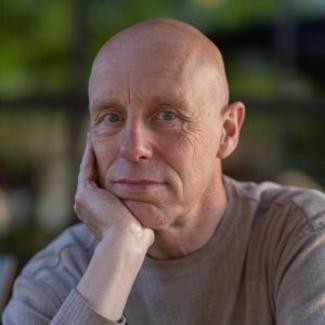 Sean O'Leary is the author of six professionally produced full-length plays. His most recent, WALT WHITMAN’S SECRET premiered at the Frank Theatre in Vancouver, BC in October 2016. POUND, about the poet Ezra Pound, will open in New York in October 2018 with Christopher Lloyd in the role of Ezra Pound.  POUND received its professional premiere at The Washington Stage Guild in Washington, DC.  VALU-MART premiered at Pittsburgh Playwrights Theater and is the winner of the University of Alabama at Birmingham’s Ruby Lloyd Apsey Award for plays confronting racial and cultural issues. It was also the winner of the Best Play award from the West Virginia Writers Conference and was a finalist in the National Arts Club’s Playwrights First competition.  BENEATH SHELTON LAUREL was commissioned by The Southern Appalachian Repertory Theatre where it played to record audiences and won a National Endowment for the Arts “Access to Artistic Excellence” grant for a touring production. Sean’s earlier play,  RAIN IN THE HOLLOWS (CLAUDIE HUKILL) received its professional premiere at Tri-State Actors Theater in New Jersey and has gone on to numerous productions as well. Sean’s first play, WINE TO BLOOD was produced by Oglebay Institute’s Towngate Theatre and selected by Brandeis University for its permanent collection of works inspired by the Spanish Civil War. Sean is a winner of the West Virginia Commission on The Arts Fellowship for Drama and was added to The Literary Map of West Virginia. He is a member of the Dramatists Guild, an alumnus of Playwrights Forum in Washington, DC, and now resides in Indianola, Washington.

The Back to the Future and Addams Family actor will star as Ezra Pound in Sean O’Leary’s drama at The Lion Theatre.Emmy-winning stage and screen actor Christopher Lloyd will return to the role of poet Ezra Pound in an upcoming Off-Broadway production of Sean O’Leary’s Pound, directed by Kathleen Butler. The Back to the Future, Taxi, and Addams Family actor played the title role in a reading of the play at The Vineyard Theatre last fall, also helmed by Butler.

Pound will begin performances October 1 at The Lion Theatre on Theatre Row in a production from Triumvirate Artists. The limited run is scheduled through October 28, with further casting to be announced.

The play imagines Pound's final days at St. Elizabeths psychiatric hospital, where the previously dominant figure retreated into himself and into a period of silence. The American poet was labeled "incurable" after being charged with treason and remanded to the hospital, where he lived from 1945 until 1958.

In addition to numerous on-screen roles, Lloyd was seen Off-Broadway in Classic Stage Company's 2013 production of The Caucasian Chalk Circle, as well as on Broadway in Morning's at Seven (2002).