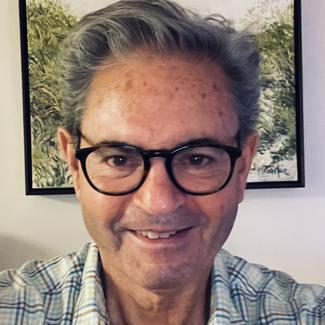 Playwright, novelist, screenwriter, essayist, film producer Scott Lax works as a Lecturer of Creative Writing in the Liberal Arts Department at the Cleveland Institute of Art | College of Art + Design.

Called “a master wordsmith of the first order” by The Midwest Book Review, Scott is a graduate of Hiram College in English. While at Hiram, Scott studied Shakespeare's history plays at the University of Cambridge in England.

Scott is a recipient of the Bread Loaf Writers' Conference Bernard J. O'Keefe Scholarship in Nonfiction, the Sewanee Writers Conference Walter E. Dakin Fellowship in Fiction, and a Certificate of Congratulations from the City of Cleveland for his body of work.

Scott's first novel, The Year That Trembled, was called “powerful” by The Denver Post, which named it one of 1998's "milestones in fiction." For his role as producer of the feature film version of his novel, Scott was awarded the “2002 Midwest Filmmaker of the Year” by the Cleveland International Film Festival. The Boston Herald wrote of the movie, "Memorable…beautifully reflects the depth of experience of the late 60s and early 70s …a touching glimpse into the lives of young people enmeshed in the political and emotional climate of the times.”

Scott then adapted the novel as a two-act full-length play for high schools, which was produced at Cleveland's University School in 2003 and 2013. Scott has since rewritten the play for community and professional theatres and retitled the play "1970.” An announcement on its World Premiere in September 2023 is forthcoming.

His second novel, Vengeance Follows, was called "A minor masterpiece of suspense and human nature," by the Midwest Book Review. His screenplay adaptation of the novel is currently being shopped.

Scott is the recipient of two short fiction awards and six journalism awards. He has also worked as business professional, speechwriter, and freelancer for clients such as Comedy Central, ESPN, Oracle, and the Cleveland Guardians baseball team. He's also worked in television, most recently as co-creator and co-writer with comedy legends Martin Mull and Fred Willard.

A popular speaker and presenter, Scott gave the 2001 Commencement Address at Hiram College. He’s also a professional drummer who has performed with musicians around the country, including Rock and Roll Hall of Fame inductee Bo Diddley.

Through all of his work – screenwriting and movie source-writing, as a published and award-winning novelist and short story writer, as a published essayist and more, Scott's first love is playwriting. "It's  within the magical space of the stage where my ideas, characters, rhythms – indeed my inner life – are most fully realized," he says.

Committees at the Cleveland Institute of Art | College of Art + Design:

• Member of The Dramatists Guild of America

• Member of The Authors Guild

1970, a Play in Two Acts, will have its World Premiere in September 2022. Official publicity and details of the play are forthcoming.

From Ron Powers, Pulitzer Prize-winning critic, New York Times #1 bestselling author of FLAGS OF OUR FATHERS, and author of the critically acclaimed biography, MARK TWAIN: A Life:  “Scott Lax has retained and enlarged on the qualities that made The Year That Trembled, his novel from which he adapted his play, “1970,” so affecting: the fumbling passions of childhood innocence as they collide with adulthood realities and horrors and promises to keep; the characters' desperate attempts to keep those horrors and promises at bay; the inevitable receding of the real meadow and the metaphorical Meadow; his protagonist’s Casey's valiant grasping for redemption, and his embrace – in the words of Aeschylus – of the coming of wisdom through the awful grace of God.”