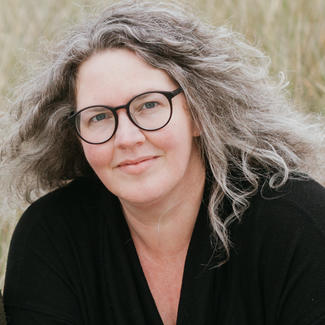 Sarah Greenman (she/they) is a playwright, painter, and Executive Director at the American Leadership Forum of Oregon. Sarah is a co-founder and resident playwright for Moderate Woo, a feminist storytelling collective on a mission to unearth buried stories, resuscitate lost narratives, and share them in a way that shifts the dominant culture of shame and isolation. Sarah is also the former Operations Director for StateraArts, a non-profit dedicated to gender equity in the American Theatre. She resides in rural Eastern Oregon. Learn more at www.sarahgreenman.com.

"Imagine a play so well conceived, staged, and performed, you'd ask to see it again as soon as the curtain call ends. Now consider a historical personality so much larger than life that to fully flesh her out requires two performers. That's "Leni", a thought-provoking tour through the world of Nazi propagandist Leni Riefenstahl. Greenman demonstrates a masterful confidence as her text darts from one decade to the next and one Leni to another. It shouldn't work, but it does, to stunning effect."  - Kevin Phinny, Seattle Weekly   "In Sarah Greenman's remarkably thoughtful new play, she grants Riefenstahl afterlife license (although she died in 2003, at age 101), to note that her supposed "fascist aesthetic" created the modern world. Her work is despised, she observes, because it is too good. That rule might put this extraordinary work and brilliant set of performances at risk, too, but I loved every conflicted moment."  - Gianni Truzzi, Seattle Post Intelligencer   "Sarah Greenman’s “Leni” offers a chilling and intimate look at the artist and of Nazi mythology, as seen through a postmodern lens."  -Karen D'Souza, Mercury News   "Playwright Sarah Greenman and director Jon Tracy have done remarkable work here, creating a theatrical experience rife with drama and political and emotional tension."  -Richard Connema, Talkin' Broadway   PRESS: Huffington Post, 2017 San Francisco Examiner, 2017 San Francisco Chronicle, 2017 The Californian, 2017 Talkin' Broadway, 2017 D Magazine, 2016 Seattle Weekly, 2008 Seattle Times, 2008 Seattle PI, 2008 The Stranger, 2008