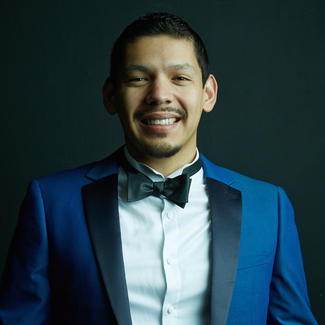 Ryan Luévano works as a music director, conductor, writer, composer, and musicologist in the greater Los Angeles area. He's served as music director for Santa Ana College, The Colony Theatre, The Sierra Madre Playhouse and the Burbank Community Theater. Additionally, he works as a professor of music at Woodbury University, Santa Ana College and Rio Hondo College. He is also a regular teaching artist at A Noise Within Theatre Company in Pasadena.

Ryan received his Master’s degree in musicology from the Bob Cole Conservatory of Music at California State University, Long Beach. As a musicologist his area of expertise is in the history of musical theater in America. Accordingly, he is currently working on adapting his Master's thesis, “Everything's Coming Up Sex! A Survey of Sex and Sexual Orientation" into a new book on musical theater history.

In the field of music composition Ryan is an avid composer for film, television, concerts and the stage. Among these genres Ryan’s specialty is composing new musical theater works and songs. His first musical, Shoot Ma!was produced at the Colony Theater in Burbank (2010) and his second musical Experience Magic!was produced at the Sierra Madre Playhouse (2011). He is currently working on a full-length musical with songwriter Jill Hoffman entitled 57 Bus: A New Musical Inspired by True Events.

Ryan is also a talent manager and career coach with his company Maestro & Magic Productions. He is manager of the Crown City Combo  jazz band, "Hollywood's Favorite Magician" Jeff Black and is a consultant for various other artists as well.