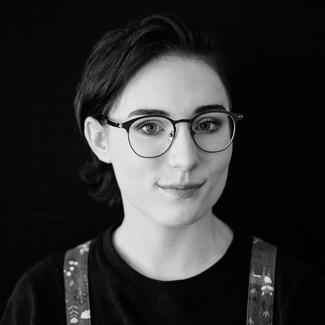 Riley Elton McCarthy (they/them) is a Danish and North-Carolinian internationally produced and critically acclaimed nonbinary playwright, performer, producer and screenwriter, sometimes Brooklynite, sometimes Rhode-Islander, but mostly pond-hopper, road tripper, and tide cruiser sailing off the waves of adventure. Riley writes for those who love the dark but tend to leave on the lights. Whether that’s fear or a morbid curiosity, they like to whittle down their audiences to the root of their biggest questions about humanity, and interrogate what gives us goosebumps or ever-plaguing nightmares about the world we live in. Conversely, they are a dreamer, a hopeless romantic, and a wallflower, inspired by the light at the end of the tunnel, or finding the beauty in bad miracles. BA: Marymount Manhattan College (Theatre Performance & Writing for the Stage)

Riley's work has been presented and developed by International World Pride, Art House Productions, Bøssehuset, Yale University, The Triad Theatre, Folketeatret, Down the Rabbit Hole Theatre DK, The Brick, The Tank, The Gilbert Theater, University of Texas Corpus-Christi, Copenhagen Queer Festival, Pete's Candy Store, Common Ground Theatre Company, Elephant Room Productions, and Marymount Manhattan College. They were a 2022 Finalist for SheNYC Arts Festival for The Lesbian Play and a 2022 Finalist for Fresh Fruit Festival for Ivories. They were a resident playwright with Art House Productions' INKubator New Play Program and a HOTMeat Resident Playwright with International World Pride, Gade Teater and Down the Rabbit Hole DK. Their work has been published with Red Penguin Collective.

Riley's current projects include IVORIES (a horror play about the terror of losing human connection), THE LESBIAN PLAY (a queer thriller about identity politics at the end of the Obama era), SHARON AND MELINA (a fantastical yet historical farce about David Bowie, Elton John and Freddie Mercury), TAKE ME DOWN TO THE LEVEE (an ensemble southern gothic about the bloodsuckers we fall for), and DAXTON ON THE NIGHT SHIFT AT 7/11 (a comedy raising a middle finger to Scott Pilgrim while interrogating the dynamics of early 90s/Y2K manic pixie dream girl films).

Riley is the founder and artistic director of the critically acclaimed playwright-centered production company, BASEMENT LIGHT PRODUCTIONS. With executive director Gustavo Blaauw, they have produced over twenty new plays in the past two years off broadway and around the world. Riley and LeRoi Richardson are the co-directors and curators of the Basement Light's new works program LIGHTBULB INCUBATOR, where they foster the growth of marginalized emerging playwrights on brand new works for the stage.