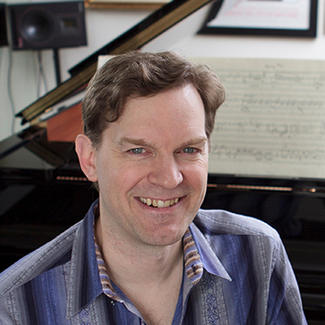 His current musical Prisoner—commissioned by the Houston Arts Alliance—is an ambitious piece based on the true story of Yugoslavian dissident Milovan Djilas. A Communist leader in Yugoslavia, he spoke out against his own government’s corruption and abuses and was imprisoned. Faced daily with likely execution, he finds a way to continue fighting through words. Working with everyday citizens to get his voice heard against a popularly elected but increasingly tyrannical leader, Prisoner gives voice to all of us right now.

Disgusted by the treatment of women he witnessed in the film industry, Richard began working again after a long break with Seattle-based composer/lyricist Mark Wilder on The Infinite Monkey Theory. Set in a start-up software company, the musical raises disturbing questions about our chauvinistic culture, ruthless and unfulfilled ambition, and immovable integrity with humor and intrigue.

Noted by TheatreChicago.com for his “searing comments on society” and an “acute metaphorical sense,” Richard’s early short musicals A Lovely Leave, That Him (with book and lyrics by Richard Mayora), With Eyes Open (music by Mark Wilder) and full-length musicals Waiting for the Sunrise, The Week That George and Viktor Died, Venture Capital (music by Mark Wilder) and The Rites of Antigone (music only) have premiered off-off-Broadway, in Chicago and elsewhere. Ford has composed incidental music for productions including Baltimore Waltz, the premieres of Eric Pfeffinger’s plays Traumaturgy and Scrooge Variations, Two Tips One Boom, and several Shakespeares among others.

He has composed music for films including the cult-feature iCrime, classic Georges Méliés film Le voyage dans la lune, and numerous webisodes, promotional videos, and video games. Richard’s first album The Globalization of Our Discontent uses music from an indie thriller to explore the state of things. Classical in its composition the score uses indie rock instrumentals to capture the angst and isolation of our world. Influenced by diverse artists Rush, Queen, Philip Glass, and Leonard Bernstein, the music has been described as “haunting and moving.”

His oratorio with orchestra and soloists Bolts of Melody inspired by the words of Emily Dickinson has been performed around the country. Music for dance with noted choreographer Rebecca French (Beethoviana) and for social media maven Kate Buck Jr (Wet!) He was the Composer-In-Residence for the Houston Heights Orchestra from 2011 to 2013. His 2015 flute concerto A Thousand Pedals was commissioned by Rock Star Flutist Sarah Jane Hargis and has already received several performances.

He has received commissions from the Houston Heights Orchestra, AFA, the University of Oklahoma’s Contemporary Chamber Players, Centre College, and his Lincoln Fanfare was performed to open the 2012 Vice Presidential Debate.

Richard’s film company produced three feature films. He has produced and assistant directed many others. He has composed and created short films with over 50 student filmmakers in programs including under-served neighborhoods and at the Monarch School for children with autism while working with Houston Grand Opera’s HGOco and AFA (formerly American Festival for the Arts.)

An alumnus of the BMI Lehman Engel Music Theatre Workshop, he has studied with David Diamond, Michael Hennagin, David Blumberg, and David Bucknam, and earned a BM in Composition with High Honors from The University of Oklahoma. He is currently working on an MFA in Film Composition and Orchestration at the University of Chichester, England. He is a member of ASCAP and the Dramatists Guild, Inc.

For several years, Richard has trained leaders for a global company committed to the empowering people in what really matters to them and having the world work for all people.

Current Projects (Musicals): RockStar Widow, The Prisoner, The Boy in the Boat, The Infinite Monkey Theory (with Mark Wilder)