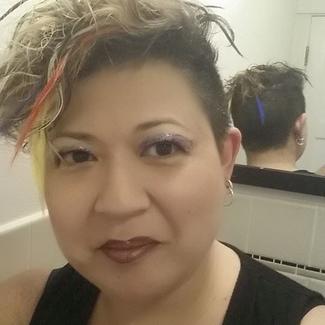 Pandora Scooter has dedicated much of her career to serving playwrights.  In 1999, she co-founded the Hallie Flanigan Women’s Play Series with fellow playwright, Rosemary McLaughlin.  She served on the play reading committee at New York Theatre Workshop.  And she also served as Literary Associate for George Street Playhouse as well as a script reader at The Goodman Theatre (Chicago), Delaware Theatre Company (Wilmington), Writer’s Theatre of New Jersey (Madison) and Arena Stage (Washington DC).

As a playwright, Pandora’s writing has been seen nationally.  Two of her solo plays, I Am Enough and OUTwordlyFabulous toured to more than 45 cities in 2011 and 2015.  In 2016, her womanist, punk-rock musical Wretch was featured at the Fresh Fruit Festival (NYC) where it won the year’s Best Musical award.  In 2017, Pandora was awarded a residency with Hypatia-in-the-Woods (OR).  In 2018, Pandora’s play Annotation was recognized as a semi-finalist in the Bridge Initiative’s Bechdel Festival 2.0.  Her play Masks, about a fictional meeting of young Tennessee Williams and Yukio Mishima, has been optioned by  To & Fro Productions and is in pre-production, pending the end of quarantine.  Most recently, Pandora completed a play about Cancel Culture, which is being considered by theatres for producction.  A film version of her play, Two Peas in a Pod, is scheduled for release in Spring 2022.

In 2020, Pandora founded the ATG (American Theatre Group) PlayLab, a play development group dedicated to serving Queer and BIPOC writers.  Now in its second year, the group boasts members who have been recognized by the Dramatist's Guild, Yale School of Drama, the National Black Theatre and the O'Neill.  Following the successes of ATG PlayLab, Pandora founded the Women's Playwrights Circle @ Speranza, which provides a space for women-identified playwrights from NJ, NY, CT and PA to come together and develop their works.  As part of her dedication to serving playwrights, Pandora also serves as an Ambassador for New Jersey for the Dramatist's Guild.

Trained at Mason Gross School of the Arts where she earned her MFA in Directing, Pandora learned from Hal Scott to always serve the play with respect, insight and passion.  While she did not decide to pursue directing, Pandora did apply this philosophy to another great love of hers: script analysis.

Introduced in 1992 to David Ball’s Backwards and Forwards, Pandora found herself smitten with analyzing plays and, ultimately, started teaching script analysis and resolved to compile her own method to analyzing scripts.  “The Bunseki Method” (both a class and a book) is Pandora’s contribution to the study of script analysis.  It is the result of 30 years of study and has been taught at the Dramatist's Guild Institute, New York University, Maggie Flanagan Studio, Terry Knickerbocker Studio, and at Pandora’s co-owned boutique atelier, Working Actors Studio, which she runs with producer/filmmaker Cedric Hill.

Born in New Haven, CT, Pandora grew up outside of Washington DC and now lives in Hampton, NJ.

Playwright in Residence. Hypatia-in-the-Woods (Portland, OR). 2018 for Selfish.

Newark City Council recognition for work on behalf of the LGBTQ+ Community (NJ). 2007.