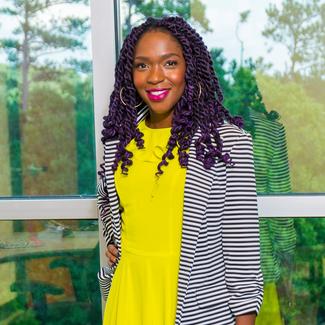 Naima Yetunde Ince, also known as NYI is an emerging playwright, who's a member of the North Carolina Dramatist Guild. NYI has success in abundance. NYI found her voice through spoken word poetry and developed a knack for words and the art of storytelling. She is originally from Brooklyn, New York, and holds two degrees. A master's in Arts and Cultural Management from Pratt Institute and a B.A from SUNY Purchase College in Theater Studies. Naima now resides in Raleigh, North Carolina. NYI is a playwright of Men Always Leave a one-act stage play, which has evolved into a full-length stage play. The play debuted in Raleigh, North Carolina at the first annual Women’s Theater Festival NC in the summer of 2016. Panelist and presenter as a playwright for the NC Women Playwrights Outloud, sponsored by So and So Bookstore.  The Cary Players produced Men Always Leave which debuted at the Cary Theater in Cary, North Carolina 2019. A panelist for Playwrights entitled “Taking the Scenic Route” for the Women’s Theater Festival NC 2019.
NYI lead the Theater Cafe discussion; Women of color: Powerful Playwrights, sponsored by the Town of Cary March 2018. Men Always Leave was nominated for 7 categories for the 11th Annual Pietzsch Awards by the Cary Players and took home two of the 7 awards. Naima Yetunde Ince was nominated as Playwright of the Year for the National 4th Annual ACHI Magazine Awards Tour of 2019. Naima Yetunde Ince founded N.Y.I Productions LLC and her name give precedence to the entity that is N.Y.I Productions LLC.  Ince says, “my goal is to reach my community and beyond. Sky's the limit.”

A few recent highlights; I have been nominated as Playwright of Year for the Annual
ACHI Magazine Awards 2019; by the Women Supporting Women Association. Original
Stage Play Men Always Leave, nominated for 7 awards for the 11th Annual Cary Players
Pietzsch Awards 2019. Some of the Categories are Best Show, Best Director and Best
Cameo.