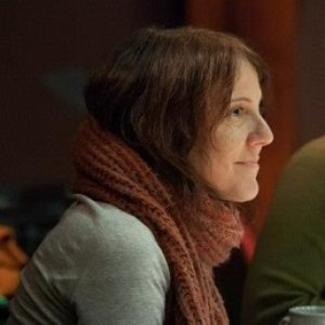 I started off as an actor/improviser, studying acting at SMU in Dallas and later studying at the Second City in Chicago and performing with the Sunday Company at Groundlings in LA, where we wrote and performed our own material every week in a sink-or-swim situation. After moving to NYC, I decided to focus solely, thankfully, on writing. I was a part of the Public Theater’s Emerging Writers Group, which helped shape my voice, as well as exposing me to many other voices and ways of making theatre. I’ve taught a particular kind of improvisation-based writing to 4th graders through senior citizens, and love the work of helping others unearth their material. My plays include The Vagrant Trilogy (The Hour of Feeling, The Vagrant, Urge for Going); The Way West; Unseen; In the Open; Falling Down the Stairs (co-writer, Tala Manassah); We Swim, We Talk, We Go to War, and the short play Dressing (co-written with Manassah), part of Facing Our Truth, Ten-Minute Plays About Trayvon, Race and Privilege. Monamansour.com