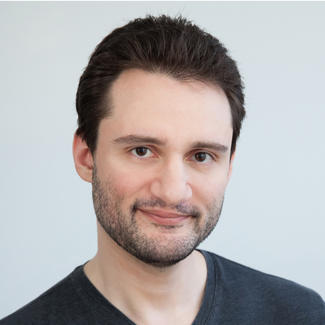 Michael Bihovsky is a New York City-based musical theater composer, writer, performer, and director, actor, and "invisible disability"advocate. He has written three original musicals (all centered around physical and mental health themes), and is best known for the viral YouTube Les Mis food allergy parody “One Grain More,” which won the “Best of Faux: Audience Award” and “Best Short” in Portland’s Faux Film Festival. Michael’s semi-autobiographical musical, Fresh!, was presented off-Broadway as a finalist in the “Scene It: New York” competition, and is currently in preparation for an Actors’ Equity staged reading in NYC. Michael's original play, Without End, premiered as a staged reading in Buffalo in December 2014; the play is a semi-autobiographical story of a grandson and his grandparents, their differing relationships to Judaism in particular, and an attempt to bridge the divide between the worlds of science and spirituality.   Michael is also an accomplished actor: favorite acting roles include the title role in the children’s animation Megillas Lester (based on the Purim story), RENT (Mark Cohen), and Tick, Tick…Boom! (Jonathan Larson). Michael graduated magna cum laude from New York University, with a combined major in musical theater, astrophysics, and mythology (proving, once and for all, that students should not be trusted with designing their own majors). Michael is also a prominent health advocate, and a recurring contributor to the Stanford Medical Journal’s SCOPE project. For more, visit www.michaelbihovsky.com.