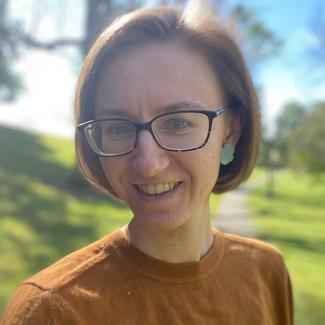 Meredith Dayna Levy is a playwright based in Roanoke, Va. She writes plays rooted in lived experience and emotional truth, and aims to make space through her work for dynamic, challenging women (both on stage and off). She identifies as an Episcopalian and a lesbian.

Her queer political epic, THE HILLS, was recently named a finalist for the 2020 season of the National Playwright's Conference at the Eugene O'Neill Theater Center.

Her full-length all-female cast historical drama DECISION HEIGHT was published by Samuel French in November 2014. Her lyrical monodrama SHE MADE SPACE and whimsical Underground comedy COUPLER have been produced as part of the Hollins-Mill Mountain Theatre Winter Festival of New Works (in 2017 and 2016, respectively). Coupler is the recipient of the the 2016 David L. Shelton Full Length play award from the Kennedy Center American College Theatre Festival, region IV. She Made Space placed first in the short play award category at the same festival in February 2017.

Levy earned her M.F.A. from the the Hollins Playwright’s Lab in Roanoke, Va. She is a proud member of the Dramatist’s Guild. She is a founding member of dwellings dancetheatre, a collaborative partnership between herself and dance maker Patricia Brooks Cope; their mission is to create opportunities for other emerging artists to explore, connect, and make performance works.