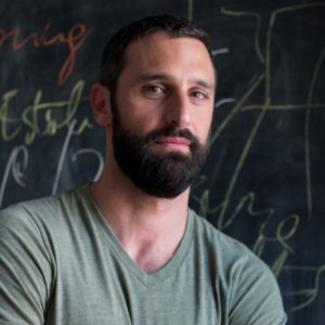 Italian born artist Marco Calvani is an award-winning writer and director based in NYC. His new play Beautiful Day Without You will open Off Broadway next October directed by Erwin Maas. Most recently, he wrote and directed the film The View from Up Here (US/France, 2017) starring Melissa Leo and Leïla Bekhti, based on his eponymous play commissioned by The Actors Studio and directed by Estelle Parsons. Trained as an actor since he was a teenager, he made his debut as a playwright in 2002 with Quasi, commissioned by the European Social Forum. Strong Hands was his first play to be performed to great acclaim throughout Europe. Commissions from Phoenix Theatre of London, Teatro di Roma, Théâtre de la Ville of Paris, La MaMa Theatre of New York and Grec Fundaciò of Barcelone followed. Other plays include: Oil (Teatro India, Roma; Robert Moss Theatre, NY), The City Beneath (Sage Theatre, NY; Ubud Festival, Indonesia; The Actors Studio, NY), Penelope in Groznyj (Kunsthaus Tacheles, Berlin; Napoli Teatro Festival Italia; Teatro Vascello, Rome), Nails (Teatro Candido Mendes, Rio de Janeiro; Fringe Festival Madrid; Galleria Toledo, Naples), I Am Dracula (Teatro Fabbricone, Prato), After the Dark (Sala Beckett, Barcelone; La MaMa Theatre). Neil LaBute directed the world premieres of two of his plays: Things of This World (Spoleto Festival; Fringe Festival Madrid; La MaMa Theatre) with Estelle Parsons and Larry Pine; andThe Second Time (Biennale Venice, La MaMa Theatre) with Phil Burke. He is a member of the Literary Board at the National Theatre of Scotland, of the Dramatists Guild of America and of the Playwrights/Directors Unit at The Actors Studio, NY. He is the winner of the 2011 S.I.A.E. Prize for Best Playwright, of the 2013 Outstanding Playwright at Planet Connections Theatre Festivity Awards and of the 2015 Calcante Prize. He’s also the recipient of the 2011 Artist Grant at the Cité Internationale des Arts of Paris and of 2015 Writer Fellowship at the Edward F. Albee Foundation.