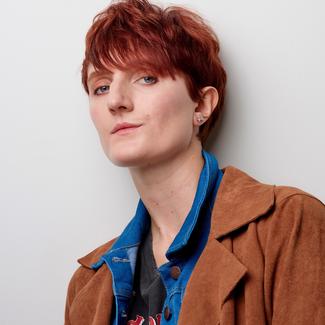 Larissa Marten is often asked if she is a covert operative. To clarify: she only writes about spies and thieves and would never spy or steal herself. Growing up speaking German at home while attending spray tan coated schools in New Jersey, now she writes about villains and what makes them devious. She advocates for sexual assault survivors in NYC ERs, and can be found spying on her neighbors.

New York writing credits include the NY premier of LOST. SHARED. TAKEN. at NY Summer Fest, and the NY premier of I KILLED THE COW at United Solo Festival. Both plays are solo shows that Larissa additionally performs in, about the female definition of self, based on the female evolution as sexual beings. She has worked on the production end for both shows as well, along with a larger team. To do so, she and her team have received half a dozen grants, and a whole new wardrobe of “business casual.”

She has worked at the Kennedy Center under the direction of Mark Bly, Gary Garrison and Gregg Henry, contributing to various workshops. In 2017, a play of hers titled SUPERBOY was workshopped there, and she worked as an assistant dramaturg at the NNPN MFA Playwrights’ Workshop there.

As an actress, Larissa has worked with the Michigan Shakespeare Festival, the Renaissance Theater in Berlin, Germany, and Young Jean Lee’s Theater Company during the Michigan stint of their tour of STRAIGHT WHITE MEN.

Her plays have been workshopped, produced and awarded at/by the Kennedy Center, the Beckwith Theatre Company, and the Manhattan Repertory Theatre. Her work has been published by Solos Literary Magazine.