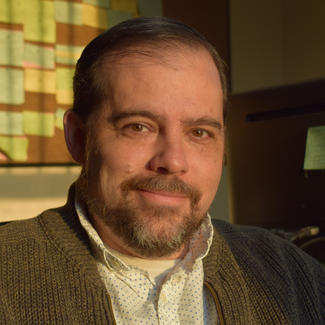 Kitt Lavoie is a playwright, librettist, director, arts administrator, new play dramaturg, and filmmaker. He is the only living playwright to have had their work performed on all seven continents – including at the Rothera Research Station of the British Antarctic Survey.

Kitt is the Artistic Director of the Lanford Wilson New American Play Festival, which identifies and honors new plays that feature dynamic roles for college-aged actors, and also trains early-career actors and directors to be effective and ethical collaborators with playwrights in the developmental process and on first productions.

For 22 years, Kitt was the Artistic Director of The CRY HAVOC Company, a New York-based not-for-profit theater dedicated to new work development and training the next generation of theater artists to support the playwright’s vision through the development process, where he oversaw the development of nearly 1000 plays.

As a stage director with a special focus on nurturing and directing new plays and musicals, Kitt he has staged more than 150 productions in the United States, Europe, and Asia, as well as countless developmental workshops and readings.

Kitt has taught playwriting, acting, directing, career development, and arts management as a faculty member at the School of Drama at New School University College of Performing Arts in New York City and NSKI Høyskole (The Norwegian Actors Institute) in Oslo, Norway, as well as a guest lecturer at Yale University, Pace University, Penn State University, Fordham University, and other colleges and universities around the United States. He is now Assistant Professor of Acting and Directing and head of the Acting and Musical Theatre Performance programs at the Dobbins Conservatory of Theatre and Dance at Southeast Missouri State University.

Kitt holds a Master of Fine Arts in Directing from the Actors Studio Drama School at New School University and is a proud member of the Dramatists Guild, the Stage Directors and Choreographers Society, and the Literary Managers and Dramaturgs of the Americas.

I am honored to be named the new Dramatists Guild Regional Rep for Kansas City/St. Louis, especially as a relatively recent transplant to the region. I have been thrilled and touched by how quickly I have been embraced by the community here, and I look forward to serving that community in this role. Throughout my career, I have had the pleasure not only of working as a playwright in around the world, but it has also been a centerpiece of my working life to create opportunities for other playwrights and to build resources to support their work. I am delighted to be able to continue doing so for writers in our area as Regional Rep. I look forward to deepening and broadening my connections with the playwrights in our region and to working together to create opportunities and an even more robust community of support for us all, especially in the challenging and uncertain times that lie ahead through the end of the pandemic and beyond.