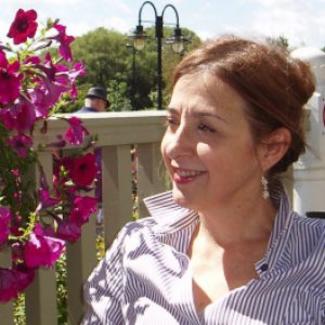 Karen Eterovich’s solo plays include: Love Arm’d, Aphra Behn & Her Pen which has toured nationally and has been performed in 135 cities including the Edinburgh Festival Fringe and the Mission Theatre in Bath, UK.  Currently, her solo play, Cheer from Chawton: A Jane Austen Family Theatrical will run for 8 performances as part of the Women's History Solo Show Series at the 14th Street Y in New York City from February 25-March 15, 2020.  Cheer from Chawton was work-shopped in Stockton, California in 2005 and performed at the Players Club and the National Arts Club in New York City, the Mission Theatre and the Jane Austen Festival in Bath, England in 2006, 2010 and 2019, the Jane Austen Festival in Louisville, KY, South Carolina Repertory Theatre and South Carolina Shakespeare Festival and universities throughout the states.  Her plays, Pumpkin Fluff, InterAlia, Rust, Where Art is Framed and X1 have received readings at the Last Frontier Theatre Conference, Valdez, AK, Blue Roses Infusion Series, Players Creative Workshop and the Lambs Club in New York City. Ms. Eterovich holds an MFA in Acting from the University of South Carolina and a BA in Theatre from the University of Akron.  In addition to the DG, she is a member of AEA, SAG-AFTRA & the League of Professional Theatre Women.