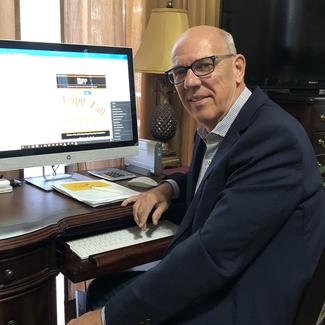 John has been director, musical director, and actor/performer/singer in over 100 productions including regional professional theatres. He holds a bachelor’s degree in Music Education and a master’s degree in Educational Technology. He understands character development, emotional audience responses, comedic timing, physical comedy, and sensitive situations. John has created staged shows in the community and in the educational environment. As an educator, he creates videos that teach, inform, explore topics, and entertain for both teachers and students. In his TV production classes, he helps students with storyboards, script writing, cinematography, and editing short film/video productions. His students have placed 1st-3rd consistently in the state of Florida each year for the past 20 years and one was recognized as “Best in Show” at the International Student Media Festival in San Diego. John also stages his student choir performances with theatrical elements and settings. “Tripp and Fall” has been in the works for many years. He began it after a visit to Boston and seeing many British farces.

John won the Arlan Ropp Playwrights Award at Surfside Playhouse community theatre in Cocoa Beach, Florida. As a result, his winning play “Tripp and Fall” was fully staged and produced at the playhouse July 19-21, 2019. Audiences’ responses filled the theatre with laughter, and at one point, tears. Photos and other information at www.tripp-and-fall.com
The play has 2 acts, about 50 minutes each, and is a fast-paced farce with comical, yet interesting characters.