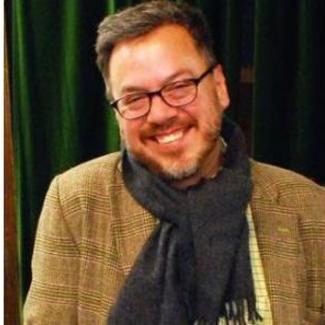 Jerome Joseph Gentes is a Lakota/Gros Ventre native by birth. He was born, adopted, and raised in the San Francisco Bay Area. He received his B.A. in English from U.C. Berkeley and his M.F.A. in Nonfiction Writing from Columbia University. From 2007 on, he worked in nonprofit arts administration in Western New York, and taught English Literature, Composition, and Creative Writing at Niagara University and Medaille College there before returning to the San Francisco Bay Area in 2011. He currently works as an experience designer at Intuit, and as a creative producer and writer. He lives in Palm Springs, CA.

With co-producer Bridgette Dutta Portman, he co-produced Sheherezade’s Last Tales, the fifteenth and final production in the Sheherezade series, which received the award for Outstanding Anthology Play Production at the 2016 Theatre Bay Area Awards. He and Portman co-produced the inaugural Along with other creatives, he launched the Musical Cafe Showcase Series in 2014, which is now in its third year as a Northern California development platform for new, original musical theatre works-in-progress.

As a teaching artist, he taught theatre and poetry with programs such as the UC Berkeley DeCAL program (Berkeley, CA) and Just Buffalo Literary Center (Buffalo, NY), and at schools including Tuscarora Indian School (Lewiston, NY), the Drew School (San Francisco), and Deer Valley High School (Antioch, CA). He was a 2012 Pushcart Prize nominee (poetry) and participated in the Found Poetry Review 2013 Pulitzer Remix. Along with several others from that project, he served as a panelist at the 2014 Association of Writers and Writing Programs Annual Conference (Seattle) and curated an offsite reading in tandem with the Conference.

He started writing plays in earnest again in 2012, with developmental readings of his full-length play Hold Your Piece at the Playwrights’ Center of San Francisco in June 2012 and September 2013 and at United Artists Theatre (Buffalo, NY) in August 2012. Shorter works appeared on stages around the Bay Area in various stages of development from workshop reading to finished, including Aria 51, Schrodinger’s Christmas, Parlor Games, Just Add What Blood Is Thicker Than, and OR: or, The Play of Light. With New Musical Theatre of San Francisco, he collaborated on the Spring 2013 production of Show Me Yours: Songs of Innocence and Experience with New Musical Theater of San Francisco, and is working on a full-length musical with composer and lyricist Rice Majors called The Right Note.

B. A., English
University of California, Berkeley, CA