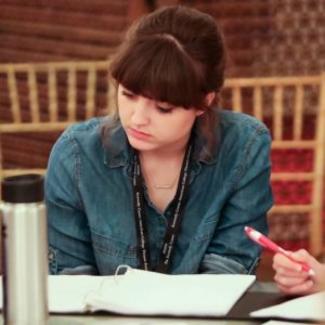 Jamie L. Berry is a Kansas City, MO-based playwright. In 2017, Jamie graduated from the University of Missouri-Columbia with BAs in English and Theatre through David Crespy’s Writing for Performance Program. During her undergraduate studies she was invited to participate in the inaugural Undergraduate Playwrights Workshop at the John F. Kennedy Center for the Performing Arts. She was also invited to attend Gary Garrison’s Playwriting Intensive at the Kennedy Center in 2016. Currently, Jamie works in the literary department at Unicorn Theatre in Kansas City, MO. She has helped cultivate the In Progress New Play Series for the 2018-2019 season and the 2019-2020 season. She has also acted as dramaturg for multiple productions in university and with Unicorn Theatre. She’s had numerous staged readings in the Columbia, MO community, as well as staged readings in the Kansas City arts community with Potluck Productions and in Fishtank Theatre’s “Along The Line” New Play Festival.