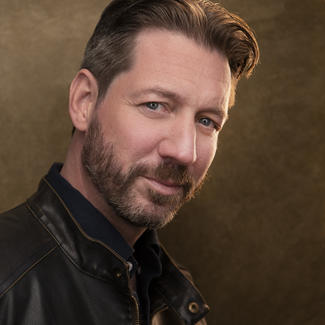 With a career spanning Broadway and off, to voiceover and television, and international operatic and concert stages, James has been involved in the development of dozens of new works for the stage as an award-winning actor, writer, producer, and director. Theatre organizations he has worked with include Ars Nova, Manhattan Theatre Club, The Old Globe, Sundance White Oak Theatre Lab, The Goodspeed Opera House, The Vineyard Theatre, The Eugene O'Neill Center, the NYU Tisch Graduate Musical Theatre Writing Program, Playwrights Horizons, The York.

With composer Charles Vincent Burwell, their musical CUBAMOR had its debut at the Village Theatre’s Beta Series in 2016 in Seattle. It was an official selection of the 2014 National Alliance for Musical Theatre Festival in NYC, and of TheatreWorks Silicon Valley’s 2013 New Works Festival, and was conceived at NYU-GMTWP. Their latest is Le Comte Noir which premiered online thanks to a commission from Manhattan School of Music. Burwell & Sasser were 2019 Jonathan Larson award finalists, and along with CUBAMOR are the creators of the new musical Bottle Shock, based on the 2008 cult movie about wine and the Napa Valley, which has had concert versions and presentations at The Napa Valley Film Festival, Ars Nova in NY, and Z Space in San Francisco. Their songs have been heard at Lincoln Center, 54 Below at Studio 54, Joe’s Pub at the Public Theater in New York, Ars Nova (where they were Uncharted Artists in residence), A Little New Music in L.A., Feinstein’s at the Nikko in San Francisco, and other venues on both coasts. For more information, visit www.burwellandsasser.com.

Alongside recent television appearances on CBS' The Good Fight, The Second Wave, and Madam Secretary, James' voiceover career spans more than 100 commercials and several dozen audiobooks across several genres for Audible and Findaway, including a number of USA Today best-selling romance novels. His commercial clients have included Astra Zeneca, Cisco Cloud Security, Mother Ad Agency, and many more. Theatre, NY City Opera, New Dramatists, and Village Theatre, among others. Favorite roles for theatre include being a singer for Riverdance on Broadway, Pilate in Jesus Christ Superstar, the cast of Forbidden Broadway:SVU, Ed in A Curious Incident of the Dog in The Night-Time, Jasper in The Mystery of Edwin Drood, Fredrik in A Little Night Music, Georg in She Loves Me, Lancelot in Camelot, Mercutio in Romeo and Juliet, El Gallo in The Fantasticks, Cindy’s Prince/Wolf in Into The Woods, Billy Flynn in Chicago, and many more.

​James is the CDO of the 959 Group, a theatrical development, production and investment strategy LLC with co-founders Kent Nicholson of Playwrights Horizons and Charles Vincent Burwell. Their first endeavor together was Nastasha, Pierre, and the Great Comet of 1812, nominated for twelve Tony awards and winner of two, which marked vocal sensation Josh Groban’s Broadway debut at the Imperial Theatre on Broadway.

James is also the bookwriter for Looking For Christmas, the new Christmas musical with country music legend Clint Black, inspired by the best-selling original Christmas album of the same name, being developed by the 959 Group and Greg Schaffert Productions. Looking for Christmas had its world premiere at The Old Globe in San Diego to rave reviews in 2018.