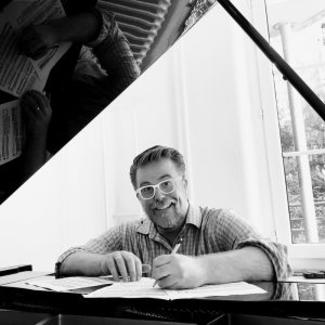 Haddon is an award-winning composer, lyricist, and sound designer whose rock musical adaptation of The Snow Queen was a featured production of the 2014 New York Musical Theater Festival where The New York Times hailed it as “A Fairy-Tale that Rocks!”

In fall of 2017, his rock musical parody of Star Wars and Wicked entitled "Wicket: A Parody Musical" opened to a sold out run at Dad's Garage Theatre Co. in Atlanta, GA.

Off-Broadway: Ring Twice for Miranda, The Atheist, Haymarket, and The Blowin' of Baile Gall. Regional: As You Like It, The Death of A Novel and Game On at San Jose Rep. Proof at George Street Playhouse. The Red Room: An Underworld Cabaret (2015 Reiser Lab Winner,) One Flew Over the Cuckoo’s Nest, and Managing Maxine at Alliance. Resurgens and Blackberry Winter at Out of Hand. The Thrush and the Woodpecker and The Pillowman at Actor’s Express.

Haddon is the winner of the 2004 & 2007 IRNE award for best original music/sound design as well as the recipient of a 2009 TANNE Foundation Award for Artistic Excellence. Haddon shared the Best Overall Design award at The 2014 New York Musical Theatre Festival for his work on The Snow Queen, and also too home the award for "best original music" by the San Francisco Bay Area Theatre Critics Circle for his score to "Game On" by Dan Hoyle and Tony Taccone.