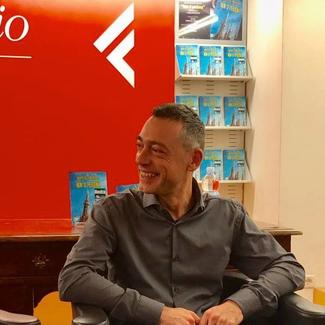 Giuseppe Della Misericordia is an Italian award-winning playwright, novelist, and author. His plays are regularly performed by professional and amateur productions all over Italy and abroad.

38 Giorni Per Cambiare Vita was given a Special Mention by the Jury of the 2020 Premio Nazionale Teatrale Achille Campanile and premiered at the Artemisio-Gian Maria Volontè theater in Velletri during the 2022 edition of the Rassegna Nazionale di Teatro e Letteratura Campaniliana.

In 2018, Le Stelle Sono Belle was selected for the “Belli Corti - Playwriting Competition” and premiered at the Nuovo Teatro San Paolo in Rome.

In 2016, Volevo Solo Cambiare Il Mondo was shortlisted for the “Teatro e Disabilità Award” and subsequently premiered at the Vittoriano Complex (Rome).

In 2014, Ti Presento Papà won the “Premio Una Commedia in Cerca di Autori” and premiered at the Teatro de’ Servi in Rome. The play was performed at Teatro Sociale, Bellinzona, Swiss and was selected for Expo - World Exposition Milano 2015 – Padiglioni Teatri and performed at Teatro Elfo-Puccini, Milano. Ti Presento Papà is translated in english by Julia Heim: Meet My Dad.

His plays Scambio Di Persona All’Italiana and L’Amore È Un Terrazzo Allagato, were performed in Luxembourg with the patronage and support of the Italian Embassy in 2019 and 2021.

He holds a degree in Philosophy from the Università degli Studi di Milano and has worked both as an academic researcher and a teacher.

He is a member of Dramatists Guild of America and of SIAE (Società Italiana degli Autori ed Editori).

To learn more about Giuseppe, visit his website www.giuseppedellamisericordia.com