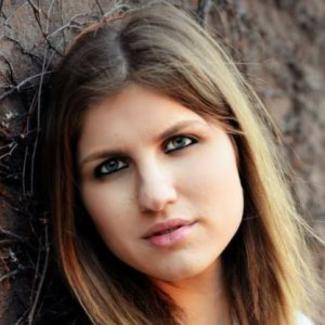 Georgeta is an accomplished young singer, musician, director, playwright, and lighting designer residing in Chicago, Illinois. She received her bachelors in Music in Special Ed and Drama, and a minor in Philosophy from Berklee College of Music. She began to play the flute as a child after finding her aunt's old flute in her late Bubbie's closet. From there, she went on to be the first chair in the prestigious Denver Young Artist's orchestra, Denver School of The Arts, and Colorado All-State Band.  She attended Berklee College of Music, where she studied the dual principle instrument of electric bass and voice, where she performed in legendary venues such as Birdland Jazz Club, Carnegie Hall, and Boetcher Hall.

Along with music, Berklee allowed her to find theater where she went on to pen 9 full-length productions and 23 short plays, all of which have been presented in New York City, Boston, Colorado, and internationally. Her comedy
"Roasted" won Best of 2018 from the Manhattan Repertory Theater, and she holds an IMDB credit for her work as a lead artist in the film "Wonderful."

Georgeta is a proud member of the Dramatists Guild. She has her certificate in ALICE (Active Shooter Response Training) and works with schools and students as an advocate for sexual assault victims. Along with writing, directing, and activism, she's a performer. Notable credits include; Cathy in The Last Five Years, Frizti in The Kiss (Originated role), and Catherine in The Foreigner.