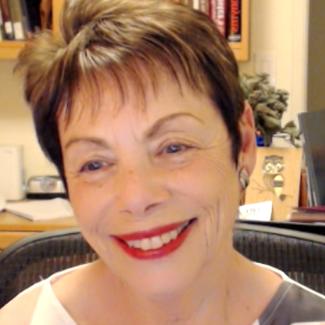 It’s never too late to travel the road not taken. From the age of 24 until I was in my mid-sixties, I enjoyed a multi-faceted career as a public children’s librarian with the Santa Clara County Library in the Bay Area and as the library director at The Harker School in San Jose, California. In my first year as a librarian I was asked to tell a Hanukkah story during the library’s lavish Christmas party. I memorized “The First Shlemiel” by Isaac Bashevis Singer and preformed it with all I had. I found out I rocked as a storyteller.

After that came puppet shows; hosting Pat Welsh who played E.T.’s voice in the iconic movie (I wrote her script for our library program); and writing and directing annual musical plays based on folk and fairytales on a big stage with lights, scenery, and one hundred second graders in costumes. Producing “The Ogre Awards” was just a small part of a library director’s job, but it gave me the most pleasure.

During the era before computer games and cell-phones, every children’s librarian could be a Merlin, bringing the magic of traditional oral storytelling and literature to children and their parents.

In retirement, at Avenidas, a Palo Alto Community Center for adults 50+, I discovered I could teach storytelling to adults; inspire my creative writing students; and direct a troupe of seniors I named The Wise Owl Players both in classes that culminated in a performance (on the stage and on Zoom) or in classes that studied the works of cutting edge playwrights. I wrote the music and lyrics to “Jeans: the Musical!” at 68. I finished my first full-length play for adults, “Deleted,” about a support group for fictional characters deleted from unpublished manuscripts, at the age of 72. Both were performed at the Mountain View Center for Performing Arts. I’m close to completing “Spit,” a full-length play about a family-owned DNA home-testing company at (gulp) 75.  My education for my second act comprised of online creative writing courses at Stanford and Oxford. I’m enrolled in a fall class at the Dramatists Guild Institute.

I was lucky to be born, raised, and educated in New York City with its cultural prowess. Attending Broadway and off-Broadway shows proved to be a powerful send off to that young storyteller who stood in front of her first audience in 1971.