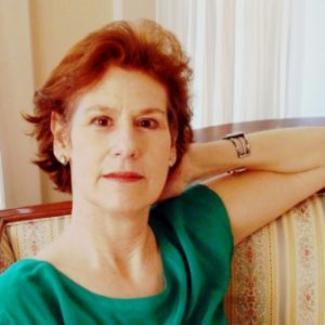 Taking up playwriting was a total surprise to me. When it happened I was a Contributing Editor with New Jersey Monthly Magazine. I came across a story that I was fascinated by, but couldn't figure out how to write as an article.  I started a list for myself of all the curious details of this story (the competitive friendship of Aaron Burr and Alexander Hamilton), and soon began seeing their relationship as scenes in a play.  I have always been an enthusiastic audience member, and was attending a lot of theater at the time. I had never considered writing for the stage, but I really was fascinated by the conflict between these two individuals and wanted to find out why, so I continued to pursue the form that the story took. As is so often with creative writing, the subject dictated the form.

Some twelve years later, after putting aside my "day job" as reference librarian and also after moving from the New York area to Houston, that play finally reached an audience as The Brightest Light.  By that time I had figured out what interested me so: the intertwined lives of these two men essentially highlighted the rise of individualism and the demise of "the common good." By the time it premiered, it was my sixth full-length play.

During those twelve years I also completed undergraduate studies and graduate studies in theater, acquiring an MA in theater arts.  I consider myself very lucky to have studied for three semesters with one of the most talented directors of new work, José Quintero, at the University of Houston, as well as other accomplished members of the staff there. (My BA degree years before had been in English literature, with a minor in philosophy, and when I looked back at that college transcript, I saw that I had taken every course available in Dramatic Literature.  My honors thesis was on the philosophy of community that was evident in all T.S. Eliot's secular plays. Obviously the theatre interested me, but not in the usual way of wanting to be on stage performing.)

That first play, The Brightest Light, has in a couple ways been very typical of my dramatic work. The theme of community can be found to some degree in most of my full-length plays.  And, I still don't start with an idea that I want to address, but instead I get intrigued by a story or a person or a conflict between individuals that fascinates me.  I pursue that, and by the time I have written the play and figured out what happened between these characters, what the play is really about (the theme, the premise, the idea) has usually revealed itself to me.

Diana Howie's plays have been performed in Houston, Chicago, Edinburgh, Vienna, and other cities. Her twelve full-length plays have received recognition in competitions in Texas, South Carolina, and Massachusetts. A touring production of "Susanna of Stratford" was sponsored by both the Texas Commission on the Arts and Young Audiences. Her collection of fifty monologues for teens, "Tight Spots," is available from Pioneer Drama Service. Playscripts, Inc. published her play about Alexander Hamilton, "The Brightest Light" in 2004, and it has been anthologized in "Best Stage Scenes of 2005" (Smith & Kraus). Ms. Howie is the bookwriter of an original contemporary musical about a jury on a murder trial ("The Jury's Out!"), the songs of which are on SoundCloud.

Among her twelve plays that have been seen by the general public are:

Leaving San Jacinto (A wounded Sam Houston seeks safe conduct back to Mexico for Santa Anna when most Texans want this dictator dead.)

Susanna & Will (Susanna Shakespeare accidentally conjures up her famous father, and he finds himself having to defend his career and a queen.)

The Jury's Out! (A musical that hones in on a group of mostly unwilling jurors who would rather be any place other than in a courtroom.)

At Liberty (A farce about the havoc that develops when a public librarian refuses to do her job.)

No Cash Value (A dramatic comedy about an indulged teen who finds himself thinking of someone other than himself.)

The Brightest Light (A drama about Alexander Hamilton who will say just about anything to secure his reputation.)

Top Dogs (A comedy about a man who dreams of having a life without the constant competition from "top dogs.")

Madame Delicieuse (A one-actor tale of an absent father in a New Orleans family.)

You Can't Wear It Out or, alternately, Burette. (A senior citizens romantic comedy about an energetic eighty-year old.)

Ms. Howie produced an annual New Play Reading Series for local playwrights from 1993- 2013 at Houston's Country Playhouse, where she was Playwright in Residence from 1997 through 2015.  She holds an MA in Theatre Arts from the University of Houston, studying there with José Quintero and Edward Albee.

A full listing of her plays can be found on the National Play Exchange https://newplayexchange.org/users/2549/diana-howie