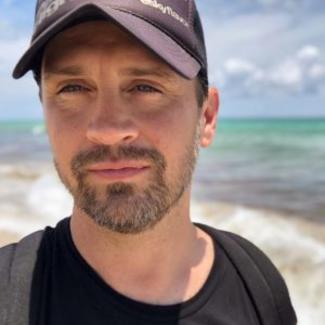 Daniel Talbott is a writer, director, actor, and a Lucille Lortel Award winning theater producer. His hour-long drama In Her Blood was recently optioned and is in development with Fabrik, and his hour-long drama Summer was optioned and in development with Sonar and Killer Films. He is also in development with Jim Parsons’ company That’s Wonderful Productions for a feature, Yosemite directed by Hari Sama (RIIFF - Best Screenplay Grand Prize; Golden Palm for Best Screenplay - Beverly Hills Film Fest). His screenplay Gray is in development with MOTOR Productions in Denmark. He was a writer on The Conners on ABC in their second season, and was a writer on Paramount TV's The Mist, based on the Stephen King novella. He recently directed his first films, the shorts Light and Telling Time, and he will be co-directing the upcoming feature Midday Black Midnight Blue, which he also co-wrote. He is the artistic director of Rising Phoenix Rep and recently directed the Off-Broadway premiere of Jessica Dickey’s The Convent. His plays include Nick and Zoe (Arctic Group/IRT), Slipping (Rattlestick, The Side Project), Yosemite (Rattlestick), Afghanistan, Zimbabwe, America, Kuwait (Rattlestick/piece by piece, Encore), What Happened When (Rattlestick, Rising Phoenix Rep/HERE), and Gray (Your Name Here). He is a graduate of Juilliard and a member of the Actors Studio.