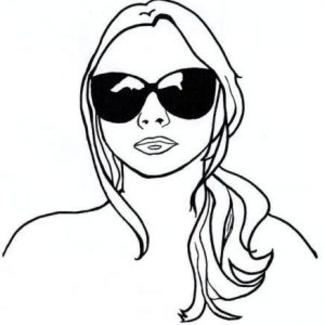 Courtney Frances Fallon's mother went into labor shortly after 5am on Friday, June 8th, 1984. Four short hours later Courtney flew out of the birth canal like it was a water slide, with such force there was an explosion of birthing fluid that soaked her mother. Plenty of time to rinse off the mucus plug/birthing goo and warm up with a nap in an incubator before hitting happy hour.

While in third grade, CFF planned to write an ambitious series of novels centered on a beleaguered girl named Carrie. Possibly because she was eight years old but probably because the plot had major holes in it, the project ultimately fell through. Feeling like a failure, Fallon let go of her dream to become a writer but continued to indulge her love of writing. In fact, it took years for Fallon to recognize that writing was her true calling despite longstanding evidence pointing her in that direction. She didn't realize anything significant about the outpouring of letters she was sending to pen pals every week in junior high. In high school, she started reading modern classics – novels and plays - and her appetite for reading went from healthy to gluttonous. When she began to spend hours working on English essays - the length and content of which her tenth grade English teacher wasn't jazzed about - she began to sense that she was meant to write.

Hoping to break onto the scene as a wunderkind, CFF planned to write a brilliant novel before graduating from college but it was like 1993 all over again. Alas, she was still a baby and had nothing to write about. She started and quit a novel in the first six months after graduation. She also started but quit a blog while traveling in South America. After returning to America, Courtney collaborated on a terminally unfinished play. Too old to be considered a prodigy or special or anything of that superficial nature, YOU KNOW THIS GIRL, a one-person play written, directed, and performed by Courtney premiered on July 27, 2009 as part of the Buffalo Infringement Festival. Fallon toured with the show to over a dozen cities. In early 2010, Fallon won a Strategic Opportunity Stipend from the New York Foundation for the Arts to fund travel to perform the show on the West Coast.

In February 2014, Road Less Traveled Productions in Buffalo, NY announced that Courtney was selected to join five other playwrights for the tenth season of the Emanuel Fried New Play Workshop with her second play, BITTER MUSE. The workshop was a platform for playwrights to develop original dramatic works. Under the guidance of Workshop Director Kyle LoConti and RLTP Literary Director Jon Elston, the playwrights provided feedback to one another as they revise their compositions. Much attention is also given to the playwrights overall skills as a writer. The nine month period culminated with a staged development reading of each new play to the public, "directed by and featuring some of WNY’s finest theatrical talent." Afterward, the playwright is brought on stage to receive constructive criticism from the audience. On top of writing for the stage, CFF also writes essays on a variety of different topics. She has done a wide range of projects as a ghostwriter and is planning to move forward with publishing work exclusively under her own name.

Aside from art, Courtney has a great passion for traveling - which happens to provides great fuel for her work. She has been to forty of the US states and over forty countries and counting. One of the most important times of Courtney's life was the two years she spent living in Kraków, Poland. She chose Poland because her mother was born there yet CFF did not grow up speaking Polish. She now considers Poland to be a second home to her but still doesn't exactly „mówi po polsku”. She also briefly lived in Latacunga, Ecuador in 2006 and Eskisehir, Turkey in 2011. She currently resides in Greenpoint, Brooklyn so she can continue to polish her Polish.

I am also a visual artist. My vagina can be seen lighting up a cigarette in the Huffington Post.