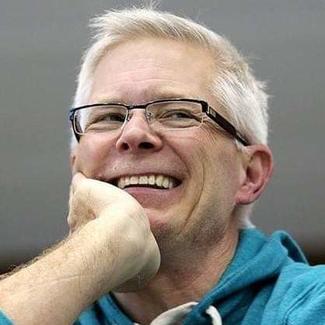 I am Cory Skurdal, a writer based in Columbus, Ohio.

The last few years I have focused on stage plays – full length and short pieces – but I've also written a half-dozen short stories, two screenplays, and I have a novel in the works.

Looking back on my writing, I realize that I consistently explore the themes of alienation, concealment, untruthfulness, and recognition of the humanity of others. For example:

I was born and raised in Williston, a small and very Norwegian-American town, in North Dakota, a rural and very Scandinavian state, where people spoke to their families, friends, and acquaintances, but they didn't always say very much, certainly not when it came to emotions and feelings, and where fitting in with the flock was highly prized and strongly encouraged. Individuality, originality, and singularity made you peculiar... odd... queer. As a young gay person growing up in Williston in the 1970s, I learned to conceal myself, protect myself, and to live less truthfully.

I graduated from the University of North Dakota. I moved to Seattle to complete my Master’s Degree at the University of Washington. I moved to Columbus, Ohio where I worked in higher education. In Columbus, I met my partner. I came out at the late age of 27. I began the long process of NOT concealing or protecting myself so that I could live truthfully.

I'd always thought about writing, but self-doubt meant I never got started. In the late 1990s, I told myself that it was now or never, and I sat down and wrote my first play - just to see if I could pull it off. I wrote a mystery/thriller, because I love them, that play, "Catspaw," was a finalist in several national competitions, and won the Jewel Box Theatre Playwriting Award, and I’ve been writing ever since.

Evolution Theatre Company has announced the plays selected for the 2020 Rainbow Wave Local Playwrights' Festival! All plays were blind submissions and were judged solely on their merit. The four plays selected are: