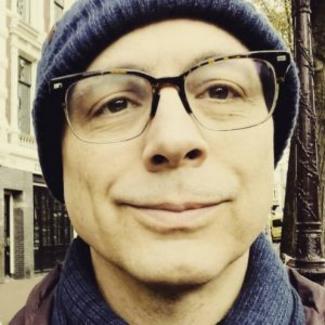 Chris Harcum is an award-winning actor, playwright, and Indie Theater Hall of Fame inductee. He is the Producing Director of Elephant Run District and is a member of Actors’ Equity, SAG-AFTRA, and the Dramatists Guild. As a solo performer, he has created and performed Green, Some Kind of Pink Breakfast, Gotham Standards, Anhedonia Road, Mahamudra, The Preservationist, Things Your Don’t Know, and American Badass. His full-length plays include Martin Denton, Martin Denton, Rabbit Island, and The Devil in Ms. Spelvin. His American Gun Show received 5-star reviews in the Edinburgh Festival Fringe. His writing has appeared in The New York Times and the Brooklyn Rail. He has appeared in over 200 projects as an actor including: Romeo and Juliet, All’s Well That Ends Well, A Doll’s House, Hurlyburly, The Weir, Six Characters In Search of an Author, Turing Test, Quoth the Raven, The Three Sisters, Suburbia, Amadeus, Hamlet, Our Country’s Good, The Scarlet Whale, The Adventures of Caveman Robot, Uncle Vanya and The Return of Ragged Dick. Chris co-adapted and played the title role in a modern version of Moliere’s The Hypochondriac. Chris stars in The Apostles of Park Slope, winner of Best Comedy Feature at the Manhattan Film Festival. He has acted in staged readings for American Bard, Ensemble Studio Theatre, Primary Stages, Guild Hall, New Jersey Repertory Company, Peculiar Works Project and many other groups. Chris trained at the UNC School of the Arts, UNC-Greensboro, and the University of Virginia. Other training includes Second City Toronto, People's Improv Theatre, and the Celebration Barn.  Chris is the Director of a Bright Future of the League of Independent Theater and a recipient of the Leading Lights of Independent Theater Award for his ongoing advocacy and support. www.chrisharcum.com.