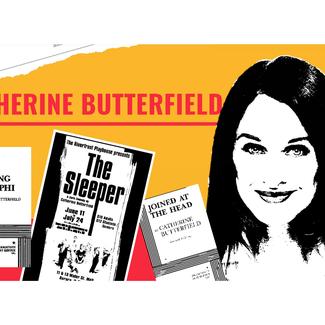 Catherine Butterfield's produced full-length plays include Life Expectancy, It Has to Be You, Brownstone, The Sleeper, Joined at the Head, Where the Truth Lies, Snowing at Delphi, and Life in the Trees.  Joined at the Head won the George E. Oppenheimer/New York Newsday Award for outstanding play by a first time playwright.  She also received the Kennedy Center- American Express award for Outstanding Promise as a Playwright, the Kaufman & Hart Award for Best New American Comedy (The Sleeper), and the Davie Award for Best New Play in Regional Theatre (Life in the Trees).  Joined at the Head, in which she starred at the Manhattan Theatre Club, was nominated for a Drama Desk award and has been produced extensively in this country and abroad.  Brownstone was commissioned by the Laguna Playhouse for their 2008 season. She co-wrote, with Ron West, an evening of political one-acts entitled Welcome to Your Alternative Reality, which played at the Open Fist Theatre in LA.

One of her newer plays, Top of the World was a semi-finalist in the 2018 Eugene O'Neill playwriting competition. It has been optioned for production in New York, as has To The Bone, an educated guess at the fate of the "hard girls" in her South-of-Boston high school. Other new plays include the play-with-music Electra, Revisited, which takes a post-feminist darkly comic look at the House of Atreus; Gellhorn, about the famed war correspondent Martha Gellhorn, and an adaptation of the Anthony Trollope novel The Way We Live Now, co-written with Ron West.

TV writing/producing credits include Grimm, Ghost Whisperer, Party of Five and Fame LA.  Regional directing credits include Brownstone at the Laguna Playhouse, and the film adaptation of her short play John’s Hand, which can be found on youtube.com and StrikeTV.com.