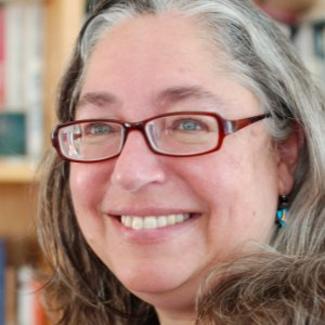 Carol Lashof makes plays to change the stories we believe in, because it’s the best way she knows to change the world we live in. Her work has been broadcast on BET (“Gap,” dir. Ryan Coogler) and NPR (“The Story,” dir. Martin Esslin) and staged on five continents from The Magic Theatre of San Francisco to Peking University in Beijing. Notable publications include Medusa’s Tale in Plays in One Act (Ecco Press); Clay, Persephone Underground, and The Minotaur, available for licensing from YouthPLAYS; and selections from Gap in the Applause Books anthologies One on One and Duo. Her full-length plays include Fräulein Dora, Nora’s Daughter, The Melting Pot, and Witch Hunt. Carol holds a PhD from Stanford University and is Professor Emerita at Saint Mary’s College of California where she taught in the Department of English and helped to establish the Creative Writing MFA Program. She is the Executive Director of Those Women Productions in Berkeley, California, and a member of the Dramatists Guild.

Countless would-be-heroes have tried to slay Medusa, the famous monster with snakes for hair, but every one has turned to stone, simply by meeting her gaze. The young Perseus is different, though. The Goddess Athena has given him a sword and shield and told him to beware of Medusa's tricks. But Perseus finds himself suddenly unprepared when Medusa's weapon of choice is a bedtime story. This play has been produced around the world at universities, high schools, professional, and community theaters from Fairbanks, Alaska to Beijing, China. Originally published in the widely-read anthology Plays in One Act, it is now newly available in an acting edition from YouthPLAYS:https://www.youthplays.com/play/medusas-tale-by-carol-s.-lashof-482

THE MELTING POT (Variations on a theme by Israel Zangwill) is a remix for the stage. The Melting Pot tells an American love story: boy meets girl, and Nation meets Metaphor. A century ago, the United States was embroiled in a bitter dispute over immigration. Nativists warned that a flood of new immigrants—Russian, Italian, and most dangerous of all, Jewish—posed an existential threat to American identity, while liberals fought to maintain the ideal of America as a haven for all races and cultures. Into the fray leapt “The Melting Pot,” a play by Israel Zangwill. It celebrated the metaphor of its title, and both the play—a wildly popular melodrama—and the metaphor were seized upon as powerful weapons by those fighting to defend open borders. The current play distills the immigrant love story at the heart of the original melodrama and interweaves it with the story of Zangwill’s play itself and its role in America’s early twentieth-century culture wars. The Melting Pot is designed to be performed by a diverse ensemble of 8 actors (4 male, 4 female). Set requirements are minimal. Running time is 75-85 minutes. Contact clashof[at]gmail.com for more information.

Where are the boundaries between memory and truth, pleasure and transgression, love and the abuse of power? By drawing clear lines, Maya believes she can close the wounds from a childhood trauma. But every step she takes in pursuit of closure leads her deeper into conflict with her mother and her son, the two people she loves the most. Premiere, 2015, Those Women Productions at PianoFight, San Francisco, CA. https://thosewomenproductions.com/our-productions/disclosure/

Since the beginning of time, the three Furies have dedicated their immortal lives to the ancient honorable principle of a slit throat for a slit throat. But when a young man walks into hell seeking help to avenge his father’s death—by killing his mother—they draw the line. And when he ignores their warnings against matricide and then begs for mercy, the order of the universe hangs in the balance. Premiere, 2014, Those Women Productions, Berkeley, CA. https://thosewomenproductions.com/our-productions/just-deserts/