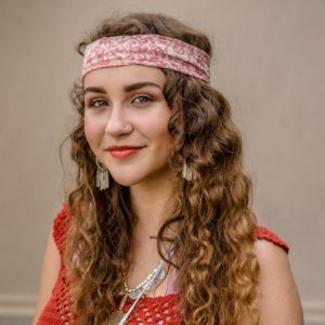 Washington DC-based songwriter, composer and performing artist Calista Garcia brings a mix of complexity and sophistication to her confessional folk and rock musings that carry a hint of pop and blues. Her style harkens back to ’70s classic acts such as Fleetwood Mac, the Eagles, and Joni Mitchell, but with a fresh and modern twist.  A recent reviewer characterized Calista’s songwriting as “a force of personality backed by a knowing musicality”.

Calista completed her second classic-rock inspired musical (book, music, lyrics, musical direction), Crystal Skies, which premiered in April 2018 in Arlington VA. The Crystal Skies project is under further development, and Calista is in the process of recording a Crystal Skies soundtrack anticipated to be completed summer 2019.

Calista is looking for opportunities to stage Crystal Skies and to further develop Lizzystrata.