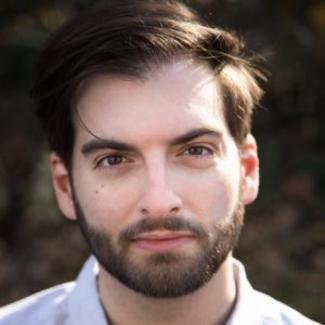 Brad Baron has enjoyed a varied career in the performing arts and entertainment industries. A theater nerd and enthusiast, he balances the disciplines of singing, acting, writing, directing, and producing.

Most recently, he sailed the high seas performing aboard Azamara Club Cruises by way of Royal Caribbean and Magic City Opera. While on board, he performed and developed various cabarets including his original act “Trouble in Paradise” alongside soprano Tanya Roberts. Prior to sailing, he produced his full-length play Last Ditch Playlistin the Capital Fringe Festival, the FringeArts Festival, and at Theaterlab in New York City. According to DC Theatre Scene: “Last Ditch Playlist is clever, heartfelt, and frustrating—in a good way. It’s refreshing to see a relationship between two gay men through the kind of tender-but-flawed lens that we take for granted when heterosexual couples are the subject…Last Ditch Playlist does adhere to the most important rule of both mixtape- and theatre-making: the rules are made to be broken.”

He has distinguished himself on the performance competition circuit. He was an Encouragement Award winner in the Violetta DuPont Competition, a finalist in Classical Idol 8, and a semi-finalist in the Shreveport Opera Mary Jacobs Singer of the Year Competition, the Lyndon Woodside Oratorio Solo Competition, and the Mildred Miller International Voice Competition. He has lent his voice to several professional recordings as well, including the Albany Records’ recording of Ohio Light Opera’s Blossom Timeas Moritz von Schwind.

He has authored dozens of plays to date. In recent years: he directed a staged reading of Last Ditch Playlist at Dixon Place; he contributed works to the 2016 and 2017 New Jersey One Minute Play Festivals (#1MPF); his one acts Homochondriaand Queer Assumptionswere a part of the Rainbow Festival with the La Strada Ensemble Theater; his short play 140 Characters or Less was presented in the Second Annual Short Play Festival with Luna Stage; his full-length Where We Always Gowas presented in the New Playwrights Series at The Villagers Theater; and Homochondriahad its regional premiere as a part of the Ringwald Theatre’s Gay Play Series (GPS). While at Princeton University, he re-imagined Sophocles’ Oedipus plays in an original drama titled In the Waste: A Theban Cycle, presented in a staged reading that he also directed.

Strangely enough, Brad was named “Best Twitter Discovery of 2015” according to Barihunks. He also has a penchant for posting video gaming content on YouTube. He is not embarrassed.

Brad is a Masters of Music recipient from Louisiana State University and a graduate of Princeton University where he received an AB in English and Certificates in Theatre and Vocal Performance. He is proud member of Actors Equity Association and the Dramatists’ Guild of America. For more info, visit www.brad-baron.com or follow him @BaronAsInRed on social media. For more on Last Ditch Playlist, please visit www.lastditchplaylist.com