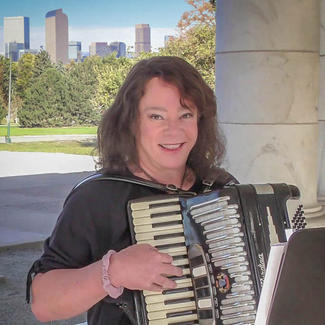 April studied music at Marietta College and Peabody Conservatory. While in college she developed her passion for Jazz and Broadway show tunes as the house pianist on the Becky Thatcher Riverboat. After college, she toured with L.A.'s #1 80's band, "The Twisters" and one of Hollywood's most pretentious glam bands "Joshua".  A computer graphics wunderkind, April worked at MAGI, the company that produced the computer animations in the original movie TRON for Disney. She was instrumental in bringing the technology to the CAD/CAM industry where it revolutionized the way companies design products. An Internet pioneer, she founded Viewmark, Colorado's first web design firm, but soon thereafter the World Wide Web becomes her conduit to log in and live out her dreams, albeit in cyberspace. Inevitably, she makes her way back to her musical roots as a board member for the beloved Central City Opera.

Today she lives in Denver, where she works as a composer, producer and technology innovator for the performing arts community. In 2017, she premiered, The Age of Sisyphus at the Aurora Fox Theater and is currently in the development phase of The Burgess and the Laird, a piece set on the Isle of Eigg, a small Hebrides island off the northwest coast of Scotland. In 2018, April debuted her new 90 minute production of WYSIWYG at the Vintage Theater in Denver. It was a sneak peek and photo op before heading off to New York City to participate in the 10th Annual Planet Connections Theatre Festivity. It was a whirlwind for sure, but along the way the show accumulated 12 award nominations for music theatre excellence, including: five Off-Broadway Awards and seven Regional Broadway World Awards.