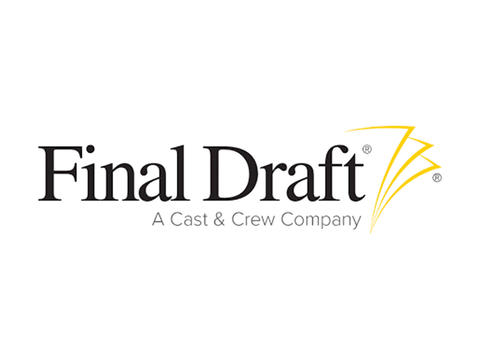 DG members save over 30% on Final Draft, the preferred software for most industry professionals. It helps you format your scripts, map out your plots, collaborate in real-time with fellow Final Draft users, and more.

Final Draft has published Final Draft software – the number-one selling screenwriting application in the world – for 27 years. Final Draft automatically paginates and formats your script to industry standards, allowing writers to focus on what they do best – writing scripts. Used by such industry giants as J.J. Abrams, James Cameron, and Aaron Sorkin, Final Draft software is the professional’s choice and the entertainment industry standard. In addition to its flagship software product, Final Draft offers the annual Big Break® Contest – a screenwriting competition that launches careers, and awards over $80,000 in cash and prizes. Final Draft also offers the Final Draft Mobile app for iPhone and iPad, making creativity truly portable. For its incomparable contributions to the industry, Final Draft was awarded the prestigious Primetime Emmy® Engineering Award in 2013. To learn more about Final Draft and its products and services, visit: https://store.finaldraft.com/all-final-draft-products.html

“Final Draft has been the industry standard screenwriting application for more than a quarter-century; but we still continually strive to make a great product even better,” says Scott McMenamin, President of Final Draft. “Final Draft 11 sets a new standard for the field as a tool that can be of enormous value not only to film and TV writers but also to writers of comics, graphic novels, video games, and immersive storytelling.”

Final Draft 11 inclues several Stageplay templates including Broadway Musicals and the Dramatists Guild’s Modern Stageplay template. Playwrights have an expansive arsenal of tools to conceptualize, outline and write their plays in Final Draft 11. The program also offers the ability to easily Customize and Save a template to specified margins and layouts.

Final Draft 11 offers a host of new and improved features, including a hands-free dictation capability, cutting-edge collaboration tools that allow co-writers at different locations to work together seamlessly, the ability to import images into script pages, Beat Boards and Story Maps, and a brand-new tagging capability that makes it easy for writers and non-writing production staff to track particular story elements and break down scripts for scheduling and budgeting.

Final Draft 11 also includes an enhanced Beat Board and Story Map that makes it easier than ever for writers to do all their story-planning in one place.

New or enhanced features include:

Final Draft 11 has been rigorously tested by hundreds of screenwriters, playwrights and other industry professionals over the past 13 months, to ensure the highest quality. Learn more at www.finaldraft.com.