Who's Getting Produced in the US?

In this second installment of The Count, we have tried to put a stronger focus on context with which to think about the statistics that we’ve gathered. Of course, all of us hold biases. I, for one, do believe that the American theatre would be more exciting, influential and have a higher bar for excellence if it produced a more diverse host of writers. And I hope The Count itself helps to push theatre in that direction. So that’s out there. Some may quibble with the contextual statistics that we have chosen and/or left out, but they seem fairly basic to us. That said, we have also attempted to hold our editorializing in check by presenting the statistics simply and plainly. 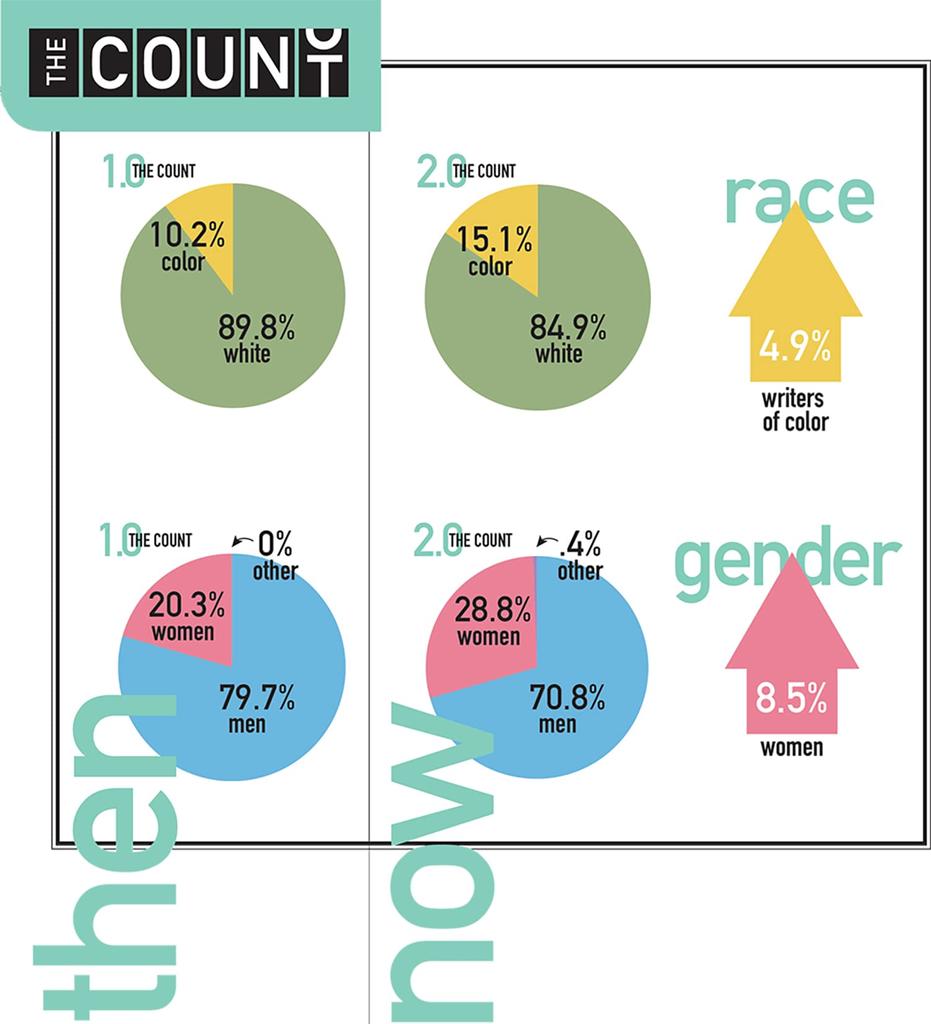 I feel it is my duty, though, to encourage you to look closely at the smallest bars on the graphs and the tiniest slices of pie. One of the most remarked upon statistics in The Count 1.0 was the exceeding low numbers of women of color whose work reached production. It might not look like much on a bar graph, and is still vastly out of proportion to their actual presence, but theatres seem to have responded to that information by almost doubling their percentage in just three years.

We have refined our statistical focus surrounding “unique writers” by counting the writers who reach production, rather than the numbers of productions (“unique productions”). Tracking both led to confusion. On a national scale, the two lines of inquiry were not numerically all that different, which led to us seeing them quoted interchangeably. All statistics in 2.0 are based on “unique writers.”

In The Count 2.0, there is a new line of study on revivals and new plays. The statistics presented here will serve as a baseline and, we expect, will be interesting to track across subsequent years. The big question here is not simply “how many of each?” but will the larger numbers of women and writers of color produced in the past three years enter the canon? Ten years from now, will a larger number of them be performed and seen again? Is our culture actually changing or are we temporarily racking up numbers to suit the current social mood?

In order to maintain accurate and comparable data each year, we created criteria, controls, and rules for the theatres, productions, and writers. Our goal is to compare apples to apples each year. However, if better methodology is discovered we will be able to amend our process and back-date data. If a new theatre is suggested for the study, and it meets all of the criteria, we will include the theatre in future studies. All of the theatres were chosen by the Dramatists Guild’s regional representatives located in their area.